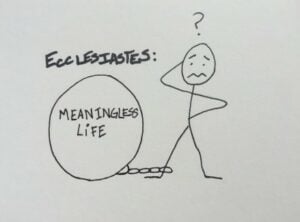 Studying Ecclesiastes is daunting. You can no more jump right in to Ecclesiastes than someone who has never swam can jump off a high cliff into a raging river and assume they will simply figure out how to swim when they land.

For starters, the book is very old – written around 1000 years before Jesus was even born. This very ancient Eastern wisdom predates the great Greek philosophers such as Epimenedes, Socrates, Plato, and Aristotle. Those guys were late to the philosophical party of human history compared to the Hebrews and Ecclesiastes.

Categorically, Ecclesiastes is Wisdom Literature. That means it’s about the practical, earthy, nitty gritty stuff of life like pots, pans, pants, pain, pleasure, and purpose. The Old Testament Wisdom Literature includes Job, which studies the problem evil and human suffering; Song of Songs discusses the beauty of love and pleasure; Proverbs teaches how to worship God with everything from our finances to our friends and family; and Ecclesiastes explores the meaning of our meaningless life.

Stylistically, Ecclesiastes rambles, wanders, and is very difficult to grasp and understand. Life is not a math equation. It is hard to categorize and figure out, and so is this book about life. Ecclesiastes is also the only book of the Bible (that I am aware of) in which God is totally silent. It is the long monologue of one man, not a dialogue between a man and his God, as is common in the rest of the Scriptures.

The Scriptures have a great deal to say about the life of Solomon (I Kings 1-11; II Chronicles 1-9; and 2 Samuel 7, 11-12). His biography reads like the makings of some scandalous epic blockbuster movie. His father was the great King David. His mother, Bathsheeba, was married to another man whom David had killed to cover up their illicit adultery. God granted Solomon one wish for anything he desired, and Solomon chose wisdom, which pleased God. Next to Jesus he was the wisest man who ever lived, was a master of innumerable subjects, and wrote 3000 proverbs, 1005 songs, and three books of the Bible. His power was unparalleled as he reigned as king over Israel for roughly 40 years during a season of peace and prosperity in which leaders from all over the earth visited his kingdom to inquire of him. He also oversaw the construction of God’s temple and his own palace that took 7 and 13 years respectively. His complicated family life included his 700 wives and 300 concubines – he could have literally eaten three meals a day, each with a different wife or concubine, for roughly an entire year.

Gifted with unparalleled wisdom as history’s salutatorian second only to Jesus Christ, Solomon devoted his life to answer that great question of every brooding teenage punk band member and their midlife crisis parent – what is the meaning of life? Solomon took the old adage “don’t knock it ‘til you try it” to the absurd by throwing himself into everything life has to offer with reckless abandon, serving as his own subject in the lab of life. If Bill Gates, Stephen Hawking, and Hugh Hefner somehow morphed into one man who was also simultaneously Pope and President that person might be named Solomon.

Solomon’s is the story of a prodigal son. Born into the affluence of his father David, Solomon departed the ways of his God to indulge his own pointless passions. The fact that he wrote Ecclesiastes indicates that he recognized the folly of his wayward ways, returned to the Lord, and wrote an honest autobiography of the empty and shallow life that he discovered apart from God. Solomon sought the best that life had to offer, and then realized that nothing rivals life simply lived in obedience to God.

Bored and burned out at the end of his life, Solomon summed up his great life experiment with one word that appears 37 or 38 times in the 12 chapters of Ecclesiastes depending upon which English translation you read. The book opens and closes with the Hebrew word “hebel.” The word is nearly impossible to nail down in its essential meaning. Different Bible scholars translate the word in a variety of ways from meaningless (NLT,NIV), to vanity (ESV, KJV, NASB, NKJV, RSV, NRSV), to emptiness (NEB). Elsewhere in the Scriptures, “hebel” refers to a vapor that is wispy, fleeting, elusive, and quickly passing. This reveals that life must be pursued with great urgency, because the days between birth and death pass like the mist of a breath on a cold morning (Psalm 144:4; Job 7:7, 16). If we layer the various translations it makes sense that our fleeting life is complex, so a complex word best describes it.

I cannot prove it, but I believe that Solomon wrote Ecclesiastes at the end of his life. I believe he wrote Song of Songs when he was young and in love, gathered Proverbs throughout his life, and after trashing his fleeting life and losing his first wife he sat down as an old man to write Ecclesiastes just before picking out his casket. Looking back in the rear view mirror of life, he writes arguably the most brutal, painful, and helpful book ever written to young people fresh out of the starting blocks of life.

While the book’s emphasis on life as meaningless is dark, there’s also a clue not to be missed. This is the perspective of life “under the sun.” This phrase appears roughly 29 times in Ecclesiastes depending upon which translation you read. It means life viewed solely without a connection to God or revelation from God. It’s literally a godless life lived solely by our limited insights gleaned solely by our experience without any word from God on the matter. To use a word from conservative grandmas who read their Bible, this is a “worldly” view of life. Life as the world sees it, not as God sees it.

According to Ecclesiastes, the evolutionary chart in school fooled us into believing that history is a straight line going up and we are more advanced than those primitive people who came before us. The truth is that history is really a circle, a cul-de-sac to be more exact. One generation after another drives around that cul-de-sac worshiping their idol and trying to outdo their neighbor with more sex, more stuff, more power, more information, and more fame. As fools often do, we mistake movement for progress. With brutal honesty about this fact, Ecclesiastes feels more like a punch in the gut than a kiss on the lips.

When I was a kid in public school, we took a field trip up into the mountains to learn about nature. They told us about survival skills and the essentials for survival: food, air, water, clothing, and shelter. To that list, I would add hope. To survive, you need hope that things could get better, even if it’s a ways off in the Kingdom of God. You need to know that life is not a meaningless fool’s parade that ends with one final step off a cliff.

Thus far, Solomon has gotten our souls hungry for even a morsel of hopeful good news. However, if it’s not to be found here under the sun, we have to start looking elsewhere. Perhaps above the sun, beyond the world in which we live, there is another world in which God lives. Maybe he could come down and bring hope and meaning with him, possibly even inviting us to join him one day in his home above the sun. Perhaps there he could reward us for all our vain efforts under the sun so that they were not meaningless. That would make our meaningless lives meaningful.

In this way, throughout Ecclesiastes, Jesus is revealed not through his presence, but rather through his absence, as some have suggested. In this way, Jesus can be seen not so much in a portrait, but rather a silhouette as is the case in the opening section of the book.

Coming up next week Meaningless Life Part 2: Stuffing the Pita of Life: Ecclesiastes 1:12-18