There was a man. The most famous man around. He walked with others, teaching them, and healing them. He wasn’t just a good man, but God become a man. He had a large following, but He had a special follower. A woman, a devoted woman. Where He went, she went. When He cried, she cried. When He spoke, she listened intently. She gave her whole life to Him, to following Him, to spending time with Him. She anointed Him with the fragrance He took to the cross. Other people called her distracted, they said she was neglecting her own life. But she knew what they didn’t, He was all there was to life. He was life! This is the story of Mary of Bethany.

Real Women of the Bible 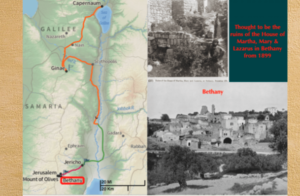 Luke 10:38-42 |Now as they [Jesus and disciples] went on their way, Jesus entered a village [Bethany]. And a woman named Martha welcomed him into her house. And she had a sister called Mary, who sat at the Lord’s feet and listened to his teaching. But Martha was distracted with much serving.

Luke 10:38-42 | And she went up to him and said, “Lord, do you not care that my sister has left me to serve alone? Tell her then to help me.” But the Lord answered her, “Martha, Martha, you are anxious and troubled about many things, but one thing is necessary. Mary has chosen the good portion, which will not be taken away from her.”

John 12:1-8 | Six days before the Passover celebration began, Jesus arrived in Bethany, the home of Lazarus—the man he had raised from the dead. A dinner was prepared in Jesus’ honor. Martha served, and Lazarus was among those who ate with him.

John 12:1-8 | Then Mary took a 12-oz jar of expensive perfume made from the essence of nard, and she anointed Jesus’ feet with it, wiping his feet with her hair. The house was filled with the fragrance. But Judas Iscariot, the disciple who would soon betray him, said, “That perfume was worth a year’s wages.

John 12:1-8 | It should have been sold and the money given to the poor.” Not that he cared for the poor—he was a thief, and since he was in charge of the disciples’ money, he often stole some for himself. Jesus replied, “Leave her alone. She did this in preparation for my burial. You will always have the poor among you, but you will not always have me.” 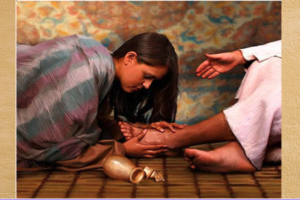 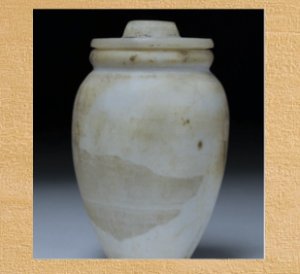 This small carved alabaster jar, or ‘alabastron’ is a new addition to the Bible Museum collection. It is from Canaan and is around 2,000 to 2,500 years old.

John 11:1-5 | Now a certain man was ill, Lazarus of Bethany, the village of Mary and her sister Martha. It was Mary who anointed the Lord with ointment and wiped his feet with her hair, whose brother Lazarus was ill. So the sisters sent to him, saying, “Lord he whom you love is ill.” But when Jesus heard it he said, “This illness does not lead to death. It is for the glory of God, so that the Son of God may be glorified through it.” Now Jesus loved Martha and her sister and Lazarus.

John 11:28-29 | When she had said this, she went and called her sister Mary, saying in private, “The Teacher is here and is calling for you.” And when she heard it, she rose quickly and went to him.

John 11:32-35 | Now when Mary came to where Jesus was and saw him, she fell at his feet saying, “Lord, if you had been here, my brother would not have died.” When Jesus saw her weeping, and the Jews who had come with her also weeping, he was deeply moved in his spirit and greatly troubled. And he said, “Where have you laid him?” They said to him, “Lord, come and see.” Jesus wept.

To help your study of  “Real Women of the Bible” series, check out this free e-book study guide here

It's all about Jesus! Read More